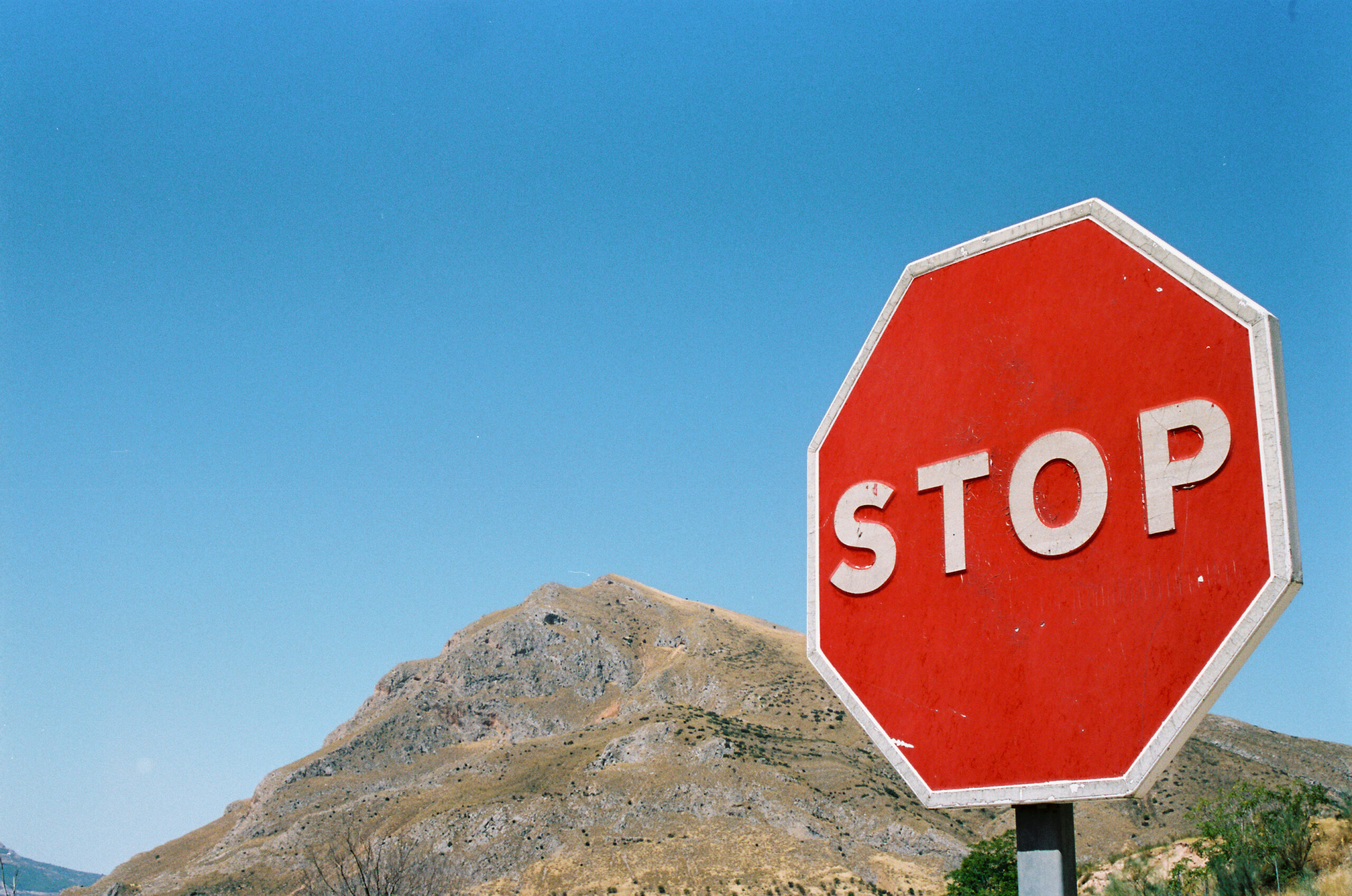 In my last blog post, I talked about the fact that today there is no excuse not to have a mid-level program. The results over the last several years have justified hiring a mid-level officer, putting together a caseload of 500-700 donors, and creating a 12-month communication plan that overlays on top of your direct-response strategy.

One of the things I really wanted to emphasize with you though is that creating a mid-level program will be your number one source of major donors.

In other words, right now, your future major donors are already in your donor pipeline. And a mid-level program will identify, cultivate, solicit, and move qualified donors into major gift portfolios.

After almost two decades of working with non-profits to build major gifts programs, almost every executive director, board member, and development director we’ve talked to has lamented that they don’t have enough major donors. So, they come up with some bad ideas on how to acquire them.

Typically, they will ask the major gift officers to “find [the wealthy person in town] or attend [a wealthy person event] and reel them in.” Or, the executive director will be reading some Chronicle of Philanthropy article or local business journal about some wealthy donor that gave millions of dollars away, and ask the development team “why can’t we get that donor to give to us” kind of nonsense.

You’d think we’d all become more enlightened in the non-profit community over the years, but we haven’t. We’re still doing things like this.

As you know by now, Veritus offers a free donor assessment to help non-profits understand the health of their donor file. One of the bits of analysis that comes out of it is our donor pipeline analysis. This is where we look at cume levels of donors, i.e. $0-$24.99, $25-$49.99, etc., and review the donor count and the total giving in that cume range. In fact, look at the one below: 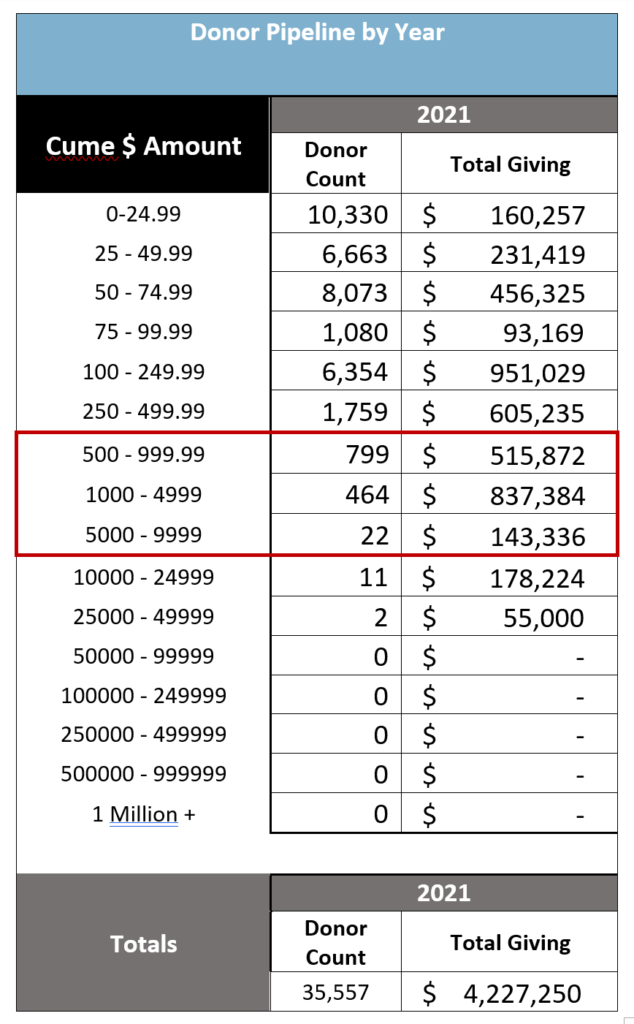 Now, here is a pipeline analysis of a large organization: 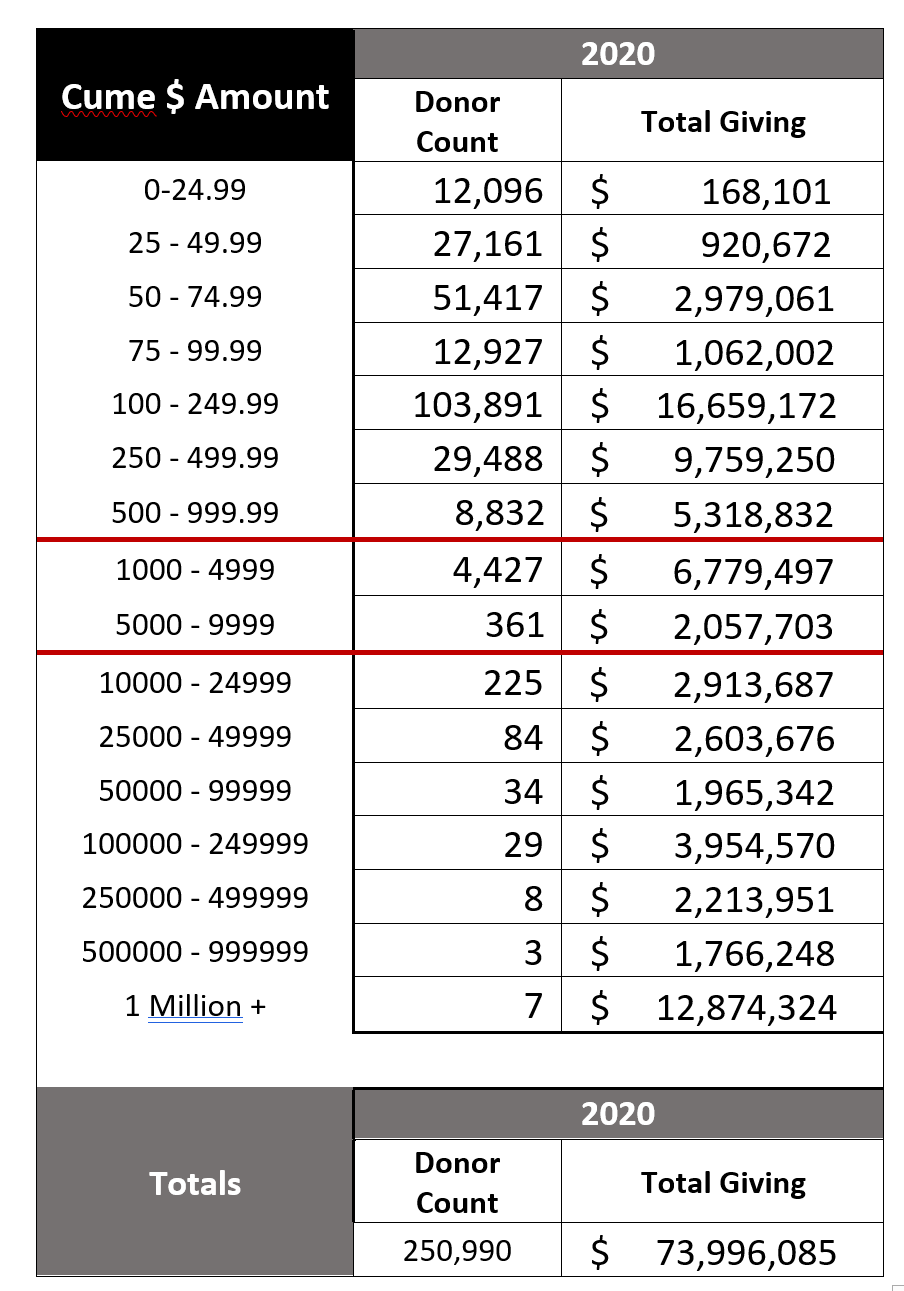 There is a large number of potential major donors sitting in that file just waiting to give more IF someone pays attention to them and starts matching the donor’s passions and interests with all the great programs and projects this non-profit has to offer the donor.

In fact, when we did a five-year revenue forecast for them, we found they could realize an extra $50MM more in revenue from mid and major donors IF they invested in their mid and major gift program and followed The Veritus Way™.

The fact is YOUR organization has these clogs too. A mid-level program will start unclogging the donor pipeline and help move more donors up into major gift portfolios where, over time, they will help you create much more net revenue than you ever thought possible for your organization.

What’s holding you back from increasing the number of major donors for your organization?