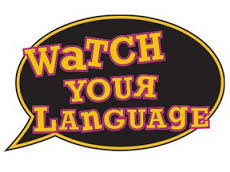 You can tell what a person really thinks by the language they use or the behavior they engage in when the customer or donor is not looking. I was reminded of this truth at a recent Veritus Group retreat when one of our associates looked me in the eye and said: “Richard, the words you just used prove that you do not respect one of my important values.”
I have to admit that, at first, I was a little offended by the comment of our associate. But as I thought about what this person said I realized she had told me the truth. My choice of words had revealed a belief that disrespected a value she had. So I had to do two things. First, I apologized to the associate. And then I examined why I held the belief; why it was important to me; what was wrong with it; and what I needed to change.
It was a good exercise, and it made me a better person.
Then I received this email from one of our blog readers who said:

I was wondering if your blog might consider (the use of) language in (a good) culture of philanthropy. I joined an organization almost a year ago, and initially heard terms like “hit ‘em up” or “make them give” “they should be good for…” and the like. While I have used much different language in meetings to try and be an example (even calling out these phrases and explaining why they are harmful), my efforts have been ignored. I am still hearing “hit ‘em up,” which really makes my soul cringe.

It makes my soul cringe, too. Can you imagine a donor hearing a MGO talking like this? It would hurt them deeply, and they would be very angry. It would be clear to them that they are simply sources of cash, not valued partners.
The problem in this organization is the leader. He or she obviously tolerates this kind of talk. It reflects a belief that donors are sources of cash – that is all they are good for, so we should “make them give” or “hit them up” for money.
It would be interesting to conduct some analysis on the donor file of this organization. I’ll bet the attrition is very high. I suspect it would be high because these kinds of beliefs ooze out of the people who hold them; they find their way to the other parts of the organization, affecting value judgments other employees make about how they treat donors.
As a result, the receipting department starts to disrespect the donors. The program department sees little value in the donor other than the money they can give. The finance department constantly fights against any move to fund donor stewardship programs because “it is not worth it.” And so it goes, like a virus – spreading ill will, bad attitudes and wrong thinking throughout the organization.
And then it starts to ooze out of the organization, affecting the donors themselves, who now start to perceive that they are not valued. What do they do? They go away.
Is the leader who is causing and allowing all of this a bad person? Probably not. He or she is simply operating with a belief that is wrong. And unlike the personal situation I described earlier, he or she is not blessed to have someone call them out and hold them accountable. So the cancer spreads.
What can you do when you find yourself in a situation like this? Here are some suggestions:

There is never a good excuse to disrespect anyone. I have had to learn this truth in many difficult ways. As I have gotten older and been around people who have shed light on my darkness, I have realized that I had a bundle of biases and prejudices that needed fixing. Little by little, I have become a better person. But it has not been easy. My one operating truth has been to find good people who will tell me the truth and hold me accountable.
You can do that, too. And everywhere you go, be a light on the subject of donors and their value to the organization you work for. Without our donors, the good that we do would not happen – not to mention that we would not be employed.
Richard