Bring It into the Light 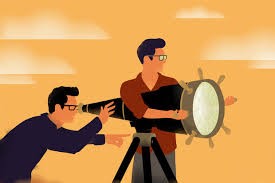 Do you remember when you were a kid and you knew you did something wrong, but you covered it up so your parents wouldn’t know it was you? It kinda worked for a little while, but eventually your parents found out, and it seemed much worse that you hid the fact you did something wrong rather than just tell the truth in the first place.
Sometimes in the non-profit world we act like little children. When something goes wrong, our instinct is unfortunately to hide the problem. The thinking goes, “gosh, if our donors and the public knew about this, we would lose all credibility. We can’t reveal this problem because we’ll lose our funding. We can’t show we make mistakes.”
Richard and I have come across this type of thinking many times in major gift departments. I recall one story where a non-profit’s donor had invested over a million dollars into a program that was not going to get off the ground. There was panic inside the organization, and they spent months trying to figure out how to still use the money while somehow justifying to the donor that it was close to the intended project.
The organization went down this road of using the funds for a different project, then told the donor later why they re-allocated his funds. The donor was absolutely furious. Not so much that the different project was way off his own interest and passion, but that the organization just didn’t tell him immediately what the problem was and ask if he would be willing to fund the other project instead.
So the organization, feeling the pressure to “keep the money,” didn’t tell the donor the truth and focused rather on hiding the difficulty… and that caused an even bigger problem.
They lost that donor forever.
Here is what Richard and I have found that really works every time. Tell the truth. Be up front with the donor. Admit it when you or the organization makes a mistake. Ask the donor to help you figure out a solution. When you make a mistake, have an action plan to get in front of it and figure out how you are going to make things right.
If you act this way, donors will respond positively.
Recently, you may have heard of a UK-based charity called “Concern Worldwide.” Boy did they pull a doozy. They inadvertently charged their monthly EFT supporters 100 times their monthly pledge. Imagine a $50 supporter going on-line to check on her banking and see a withdrawal of $5,000 from the charity, which caused the donor to have insufficient funds, bounced checks and bank fees. It created quite a storm.
But as bad as this was, Concern Worldwide moved into action quickly to rectify the problem, get people their money back and in some cases refunded even more money – just so their donors didn’t panic. The CEO got out ahead of it, admitted a mistake had been made, and assured donors their privacy and information was secure. Now to be sure, donors were still upset. And rightly so – but the non-profit took immediate action and admitted they messed up. I believe that in the long run they will be okay, because they did the right thing and told their donors immediately, and they had a solution.
When a non-profit or an MGO makes a mistake and admits that mistake and takes ownership of it, nine times out of ten, donors will understand. In the long run, they will trust you more because you were up front about it. And that one donor that doesn’t… well, you can’t please everyone.
You need to know that donors are much more understanding and forgiving then we give them credit for. We all make mistakes. It’s how we respond to mistakes that makes all the difference.
Jeff