Listening to Donors Is Not What You Think It Is 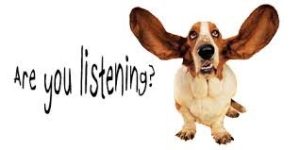 I have to admit that I am not a good listener. Actually, I listen well IF the subject interests me; then no one listens better than me. But listening in general is not one of my strengths. So I constantly have to practice to make myself respect those around me and listen properly.
I was helped on this journey on listening when one of our associates, Lisa Van Cleef, sent me an article from the Harvard Business Review written by Jack Zenger and Joseph Folkman titled What Great Listeners Actually Do.
In this article Jack and Joseph say “most people think good listening comes down to doing three things:

But the fact is that these points are only a small part of a listening skill. This reality caught my attention, especially as it relates to how we all interact with donors.
Jack and Joseph, to put it in their words, “analyzed data describing the behavior of 3,492 participants in a development program designed to help managers become better coaches. As part of this program, their coaching skills were assessed by others in 360-degree assessments. We identified those who were perceived as being the most effective listeners (the top 5%). We then compared the best listeners to the average of all other people in the data set and identified the 20 items showing the largest significant difference. With those results in hand we identified the differences between great and average listeners and analyzed the data to determine what characteristics their colleagues identified as the behaviors that made them outstanding listeners.”
“We found some surprising conclusions, along with some qualities we expected to hear. We grouped them into four main findings:

Think about these conclusions as you interact with the donors on your caseload. And ask yourself the following questions as you are listening:

Think about tuning up your listening skills with your donors. Besides the fact that you will secure more information, your improved listening will result in a happier donor who believes you really value her.
Richard