Practicing Calm in the Midst of a Storm 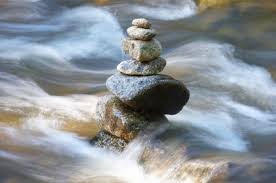 Marla had just come back from a major donor lunch where one of her donors was upset with the way her organization was handling a project that he was helping to fund. As she sat at her desk thinking about this, another donor called to tell her some very bad news. The donor had lost a lot of money in the stock market and had to rescind his $4 million pledge for the capital campaign they were about to go public with.
If that wasn’t enough, just two minutes after Marla had hung up the phone with that donor, her boss came into her office and announced that he’d taken another position and would be leaving in two weeks; he’d recommended to the executive team that Marla act as the interim Director of Development.
Marla could feel a large knot beginning to build in the pit of her stomach. Her first instinct was to let her mind race and think about what she had to do to fix everything; her heart began to pound. But then she took some deep breaths.
This calmed her down immediately, which then allowed her to focus on remembering the training she had received about reacting to crisis. That training emphasized that real leaders, when faced with either a large crisis or a series of them, all respond the same way: with calm resolution.
Marla was able to recover quickly from her initial reaction and understand what needed to be done in each situation.
Instead of blasting the program person who was running the project her donor was upset about, she was able to sit down with her and calmly discuss and understand the full situation. They were able to set up a meeting with the donor, and after that meeting the donor was understanding and supportive.
Regarding the donor who called and had to rescind his pledge, Marla was able to gather the capital campaign team together and explain what had just happened; they developed a plan on how to overcome the loss and still be on track to go public. Marla was actually able to meet with the donor, and she realized the donor had overreacted to his financial situation. After thinking about it, he was able to donate half of the $4 million, then commit the other half when his portfolio turned around.
Finally, with her boss leaving in two weeks, Marla was actually prepared for this to happen eventually. So she was able to meet with leadership and proactively give them a list of actions she needed to take that would assure the executive team that everything would be okay. Her immediate leadership actually led the executive team to offer her the position full-time.
As a major gift officer, you will eventually run into times of crisis. It’s inevitable. But it’s how you handle those times of crisis that will determine if you become part of the solution or if you add to a problem.
Richard and I believe that all major gift officers need to consider themselves leaders at their organizations. You have the difficult job of being the conduit between a donor and the mission of the organization. This requires much of you. One thing it requires is for you to lead with your donors and your organization, to bring them together.
So how do you remain calm in a storm like Marla?

As an MGO, you will encounter times of crisis. How you respond to crisis will make all the difference to your organization, and most importantly to your donors. Prepare yourself for the crisis to come, and you will weather that storm.
Jeff