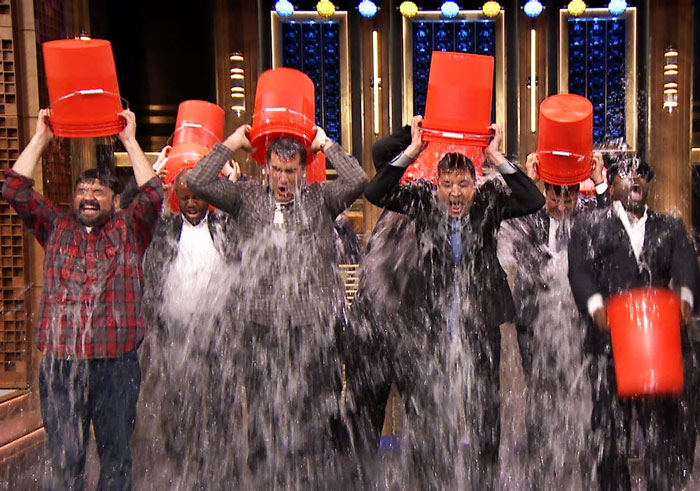 When I first saw all the video and news stories about the Ice Bucket Challenge I thought: “That is really cool. People are really getting involved. Good for ALS Association (ALSA)! What a great way to raise money.”
Then I got to thinking about it, and my thoughts took me to what could be a very unpopular thing to say: Do the people giving to the ice bucket challenge really care about ALS? I hope so. But I fear not.
I became scared that all my good friends would be mad at me for even commenting on such a wonderful fundraising event that supports a great program. But the more I thought about it, the more I became resolved just to say it. And that is why I am writing today.
First, let me be clear. I am not against ALSA, nor do I feel bad or jealous that they have been successful in raising tons of money for their cause. In fact, I am happy for them.
But here’s the problem.
I suspect that a majority of the people giving to the ice bucket challenge gave because it was a fun thing to do – the ice bucket thing – NOT because they were truly supportive of or even understood what ALSA actually does. Go on – say it isn’t true! But it is. If we could line up every single person (3+ million new donors according to ALSA) who did the ice bucket challenge and ask them what ALSA is trying to do, most of the people would not be able to come up with it. If we then asked them why they did it, they would likely say: “Well, it was fun. And it WAS for a good cause.”
And that would be the end of it. There really is no actual relationship between the cold, wet person and the cause. No long-term commitment. No delving into what causes ALS, no knowledge that ALS stands for Amyotrophic Lateral Sclerosis (a disease of the nerve cells in the brain and spinal cord that controls voluntary muscle movement), also known as Lou Gehrig’s disease. None of that. It is just a fun, rather mindless event that has raised a truckload of money.
Sorry, I don’t mean to throw cold water on all of this.
Scott Gilmore, writing in Canada’s national weekly current affairs magazine, Maclean’s, has a different and controversial view of the ice bucket challenge. Here’s an edited piece of his article:

“The ALS Ice Bucket Challenge is bad for you.
I don’t mean you will catch a cold (you won’t), or look like a craven sheep (you will). I mean that when you are inspired by a viral fad to donate your limited dollars to a charitable cause, you ignore the diseases that genuinely threaten.
The marketing gimmick is very clever. It is short, immediately understandable, and like the most popular forms of slacktivism, it is easy to do, entertaining to watch, and narcissistically self-promoting. Every screen on our desks, on our walls, and in our hands is filled with celebrities, neighbors and politicians showing off their earnest compassion and occasional humor.
As a result, the ALS Association has received more than $100 million (updated figure) so far, compared to only $2.5 million during last year’s campaign. It is a great way to raise money — but it is a horrible reason to donate it.”

Scott then goes on to explain that “instead of supporting what is most needed, we support what is most amusing” and what we should be doing is giving our money to underfunded, more urgent causes. Read his article to better understand the position he is taking. But essentially, he is asking donors to be more thoughtful about their giving.
And that is a point I can agree with, although it is impossible to control. Also, I am looking at this from the fundraising and major gifts point of view, rather than the donor’s point of view. In other words, the donor can do what she pleases for whatever reasons she has. That is her business and I am not about to tell her otherwise.
What I am reflecting on is this: A promotional idea and/or event is great if it can garner a lot of attention for your cause and draw real donors into your organization at a good return on investment (ROI). By “real” donors I mean people who truly care about your cause and want to travel with you for the long term.
Don’t get me wrong. $100 million is nothing to sneeze at. Nor are 3+ million new donors. The ROI is gonna be out of this world. And if ALSA can convert even 1% of those 3+ million donors to become real supporters of the ALS cause, it will be nothing short of a miracle. I doubt it will be that high, but I hope it will be even more. And it will cost a lot of money to talk to all of them to find the ones who truly are ALS supporters.
All of this brings me back to the major point I want to make. Fundraising and major gifts is about relationship first, then money. Not the other way around. This is why Jeff and I go on and on about bringing major donors along relationally. If the donors on your caseload are not on a relational journey with you and your cause – if it is just about the money – then their journey with you will be short-lived. And if it is short-lived your caseload will suffer, your ROI will be bad, and your organization will not get the funds it needs.
Our major gifts philosophy, simply stated, says: seek relationship with your major donor and purpose to uncover and serve their interests and passion in that relationship. If you can’t do that with the strategy you are creating, then don’t do it. It will not attract the right donor for your cause, or keep the right donor once you have them.
I am happy that ALSA has raised so much money and has 3 million+ new donors in the door. I hope they can find a way to keep many of those new donors interested and supporting the cause they represent.
When you hear about these kinds of supercharged events, ones that are raking in the dollars and donors, let me suggest several healthy ways to think about it:

What matters in your major gift program and on your caseload today is that you have solid long-term relationships with your donors. THAT is really important.
Richard