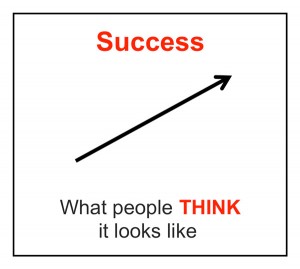 It was budget time, and the manager was asked by finance to provide a major gifts forecast for the coming year. The manager and the CFO discussed how they should arrive at the right number and the CFO said: “Look, just take what they (the MGOs) did last year and add 10%. It’s what we do every year.”
And that, in a nutshell, is what success looked like in major gifts for that CFO and hundreds of other non-profit managers. It was a trend line heading up in yearly increments of 10, 15 and even 20%. That was success.
This captures what most folks think major gifts is all about. It just gets better and better every year – just accept it and get with it!
I’ve personally never experienced success like that, in any area of my life.
Take an investment. You may start at one place, it will go up, then it will go down, then up and, if you watch it carefully, you might make a little money.
Or a product idea. Last I checked, it takes 1,200 new product ideas to come up with one successful launch. That sounds like a lot of downward stuff happening before you go up.
Or a relationship. I’m always amazed at the answers I get, when I talk to a couple that has been together for many years, about how things have been going.
I ask them: “So, how has it been all those years?” And one of them says, while the other one nods approvingly: “You know, it just gets better and better.” So then I ask the follow up question: “So has it always been good? Has everything always been peachy?” And then it comes out: “Well, we’ve been through some difficult times, you bet. It wasn’t pretty there for a while…” I am reminded that even in relationships, while the trend might be positive over time, there are quite a few ups and downs along the way.
Even nature goes through a cycle of life and death and life. Up and down. Recycle. Renew.
So this notion that an individual relationship with a major donor is always going to be an upward-trending cakewalk is just not true – it’s not going to be like that at all. It will have its ebbs and flows like everything else in life.
In other words, success in major gifts will look more like this: 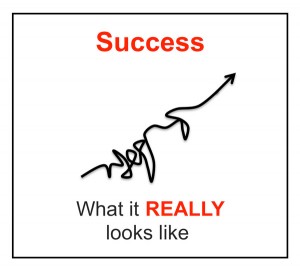 It will start in one place and wander. That is what you should expect, and that is how you should manage it. The path toward fully cultivating a donor in major gifts will not just be a matter of 1-2-3 and BAM, it’s done! It will be a journey with many paths.
Jeff recently wrote about major gift work being hard. You should read his post – it will give you a look into the reality of your work in major gifts. But I want you to know what to expect as you take the major gift journey. Here are the most important realities we have discovered:

These are some of the up-and-down kind of things we have observed in this work. Do you notice one theme that runs through all of them? They are NOT a straight line going up. It is a bit of wandering, like all of life.
So, I believe the path toward success in major gifts is a bit of trial and error, of yin and yang, of back and forth, of yes and no. It is not a straight line going up. Therefore, there are certain principles you must internalize to keep yourself grounded:

So think of your success in major gifts as a journey, with paths that go up and down. If you can travel in this manner, the “downs” will not get to you as they do now. And your journey will be a lot more pleasant.
Richard