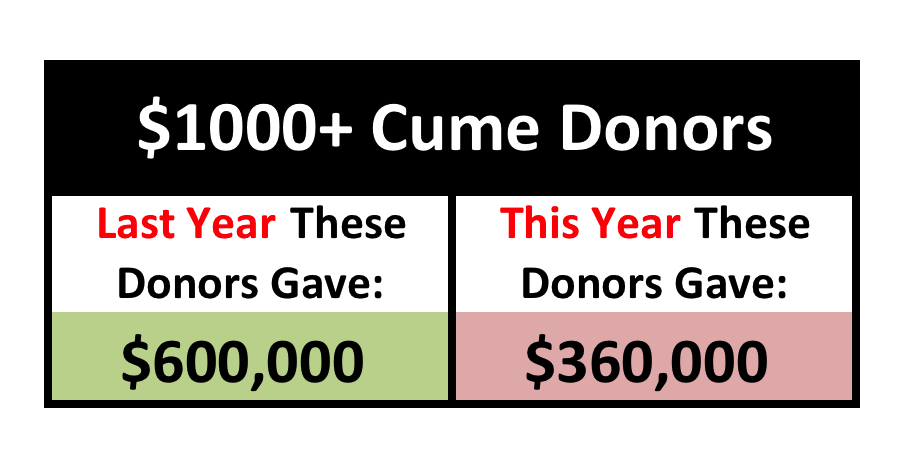 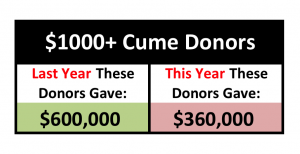 The graphic above is a simple way for me to illustrate a point that escapes many non-profit leaders and their finance managers.  In fact, I was in a meeting last month with the top finance people and management of a leading national charity and I just could not get them to see that they were losing money – that the donors at the top of their donor pyramid were giving up to 40% less than those same donors had given the year before!
Instead, most of the discussion was centered on how we need to get new donors, chase the wealthy business people that go to the local Rotary Club and uncover new ways to find wealthy people in the community.
“What?” I almost screamed.  “Can’t you folks look at this spread sheet right in front of your eyeballs and see that the 722 donors who gave $8.1 million last fiscal year only gave $3.8 million this fiscal year that just closed!?  Can’t you see that?  Look. Scroll down the list of donors and try to find one large gift that went away so you can explain why we are missing so much money! Try it.  You will not find one.  The fact is a huge portion of these good donors either went away or gave substantially less.  And now we are missing over $5 million for these donors!  OUR donors.  Not strangers.  Our donors!”
Now, I didn’t quite say it that way.  I was calm, professional and controlled – at least on the exterior.  Inside I was boiling and impatient.  Why?  Because over and over and over again Jeff and I see situations just like this where managers and finance folks are literally scraping for dollars to cover budget deficits and revenue shortfalls while right under their noses are a group of good donors that are just going away.  It has got to be one of the most frustrating experiences of my professional career.
And then there are leaders, even of small organizations, who can’t find their way to starting a major gift program because “we don’t have the money.”
Hmmm.  Using the numbers from my illustration above, which I purposely made low, here’s the scenario:  “So, you had $600,000 last year from these donors.  Now you have $340,000 from the same donors.  Don’t you agree that if you had spent some money to prevent that from happening you would be further ahead?”
Usually, when Jeff and I pose the question that way, the leader can see the error of his ways and some headway can be made to stem this value attrition.
Sometimes, though, the leader, when asked our “Wouldn’t you be further ahead” question, retorts, “Well, if I hired an MGO, that cost would be $100,000 (comp plus bennies) AND you will always have some attrition, so I can’t see how I would be further ahead?”
This is when I stick a fork in my eye.
Let’s do the math.
Last year the donors gave $600,000.
Subtract 15% normal attrition if an MGO is involved with these donors.  So that would be $90,000, leaving us with $510,000.
So, instead of having $340,000 without the MGO we have $510,000 with the MGO.  That’s pretty good.  And, chances are, if the MGO does the work that a good MGO can do, she will make up for her cost by upgrading the giving of one or two donors during the first financial period.  Jeff and I have seen this happen.  It certainly happens in the second year of the MGO, but it can happen sooner.
But, let’s say it doesn’t.  So now we subtract the cost of the MGO of $100,000 and that leaves us with $410,000.
Seems like having $410,000 in hand is more than having $340,000, AND in terms of donor value we have more than that.
Here’s the point.  If you do the analysis you will find some version of the picture I painted above which, when  discovered, will not allow you to just sit idly by and do nothing!  You just can’t do it?  Why?  Because the donors are literally flocking out of your organization.  And they’re going to other organizations to give their money – most likely to places where they will be better cared for and where they will know their giving is making a difference.
If you’re reading this post and your organization is in the same situation I’ve described here, you need to get out of the status quo and find a way forward.  (We provide free donor analysis to help organizations uncover the facts of donor value attrition.  Write us if you need this done. We’ll be glad to help.)
More importantly, keep track of each of the donors on your caseload.  Carefully watch what they are giving year to year.  And do it on a timely basis, because once you have missed a donor’s giving cycle you may have missed the opportunity to keep him.  And that is how dollars and donor value are lost.
Here’s the good news: if you pay attention to each of the donors on your caseload, you will be amazed at how they will stay with you and give more.
We work with MGOs in organizations where the revenue from non-caseload donors is dropping anywhere from 40-60% in one year while the donor value from their caseload donors is increasing 5-14%!   It is truly amazing.
And it proves the point that if you care for your good donors and are diligent in letting them know their giving is making a difference, then they will stick with you no matter what.
Richard