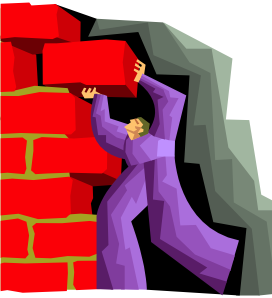 We are often asked about the principles that govern the creation and management of a caseload.  In too many situations, Jeff and I find that there are no principles or rules for adding and deleting donors to and from a caseload at all.  In fact, no one has even thought about it, which is pretty scary.
I am going through some documents of a leading national charity right now where caseload sizes range from 86 up to 410!  These are active caseloads!  And, as I dig deeper into the circumstances surrounding the nature of these caseloads, I find that, most often, some authority figure has subjectively set up caseload criteria for the MGO.  I say subjectively because the criteria for who gets added and who gets taken off reflects the personal subjective view of the authority figure, not some strategic approach.
This happens way too often, which is why I am writing about this topic.
First of all, the over-riding principle for caseload management composition is that an MGO should only be relating to qualified donors for the purpose of simultaneously fulfilling individual donor interests and passions and securing revenue for the organization.
This one organizing principle is violated over and over again in way too many situations that Jeff and I encounter.  Things happen such as:

So, this organizing principle must be in place: a single-minded focus on 150 qualified donors.  And by “qualified” we mean that the donor meets the major gift criteria for the organization AND the donor has agreed to a relationship with the MGO.  Once a caseload with this composition is in place, there are two objectives that need to drive adding and dropping donors from it.

The pursuit of these two objectives in caseload management practically means this:

While all of this is going on, remember that every year, at least once a year, you need to identify one or two, maybe three, donors who you believe, if managed in a highly personalized donor driven way, could give a substantial six or seven figure gift to your organization. You should always have 1-3 donors on your caseload who you are managing in this way.
The net of all of this approach, if performed exactly as we are prescribing here, will be a caseload that grows in value over time.  Why?  You are consistently increasing the value of the caseload by retaining donors of high value and replacing donors of low value.
This approach, over time, causes the value of the caseload to increase. There is hardly any caseload in the field of major gifts that just grows in value on its own.  Someone, usually the MGO, is actively managing up the high value donors and managing out the low value donors.  That is how you increase your caseload ROI and how you produce more net revenue for your organization.
Richard