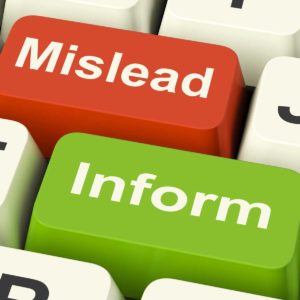 There are two things happening out in the marketplace right now that are damaging to donors and philanthropy in general.
First, some consultants/fundraising agencies and some philanthropy media are spreading the word that a majority of non-profit leaders are reducing solicitations, implying that you should follow suit and stop or reduce your asking during these times.
One group stated that 83% of fundraisers are canceling or postponing solicitations! When you dig into the details, you find that it’s 83% of 412 organizations, most of which are from the arts and education sectors. Jeff and I have several problems with this kind of statement:

Another agency, one that serves a number of large clients, is stating that the number of gifts is down compared to last year. But then you dig into that report and you find that that agency is behind in their receipting due to “labor shortages.”
Oh, OK, so not all the gifts are accounted for. So that’s why the numbers are lower for the month than last year! Goodness, people. Get it together. You can’t be reporting this stuff as being factual. It simply is not true!!
Secondly (and partially as a byproduct of the wrong info mentioned above and partially due to wrong thinking), some managers, leaders and front-line fundraisers are taking a “don’t ask” or “reduce your asks” position with donors. They’re saying that now is not the time to ask – that it would be insensitive and intrusive.
What!?? This is crazy.
Our response: “Did you ask the donor?”
Nope.
So, you decided on your own that not asking is the right course?
Yep.
Well, you’re wrong. Now IS the time to ask. Donors love your organization and what it does in society. And Jeff and I are talking about all types of organizations, not just social services and COVID response organizations. We’re talking about the arts, education, science, conservation, etc. All of them.
All of these donors care deeply about your organization and are concerned about its financial welfare. Believe me, we know because we represent scores of them and, unlike the examples of “reporting” I cited above, we’ve been talking to donors.
Donors from the arts sector.
Education donors.
Faith-based organization donors.
Conservation donors.
All types of donors from a representative sample of all the sectors. And they’re eager to engage, they’re giving, and some are saying they can’t give as much or at all at this time, but they’ll be back on board when “things straighten up.” No one is saying not to ask them.
And there are some amazing stories of extraordinary gifts – five, six and seven figure gifts – from donors who hadn’t given that much in the past.
Why are they doing this? Because they believe in and love the organization they support. AND, because the frontline fundraisers told them what the need was and ASKED them.
It’s that simple.
Here’s the other thing. We’ve been through so many crises of the past. The 1987 crash, the dot-com bust, Y2K, 9/11, the anthrax scare, the 2008 downturn – all of them. What have we learned about donors and giving through all of that? Several things:

So don’t swallow the line that other organizations aren’t asking and therefore you shouldn’t. And don’t believe the falsehood that donors don’t want to give during these times.
It simply isn’t true.
What’s true is that, as humans, we need to give. And the act of giving is a transcendent action and behavior – it takes the giver above the fray and releases goodness into the planet.
We all need that right now. So don’t stop giving your donors the opportunity to fulfill their passions and interests. Remember, all of this was never about the money. It’s about doing good. (Tweet it!) And hardly anyone, no matter what’s happening around them, wants to stop doing that.
Richard