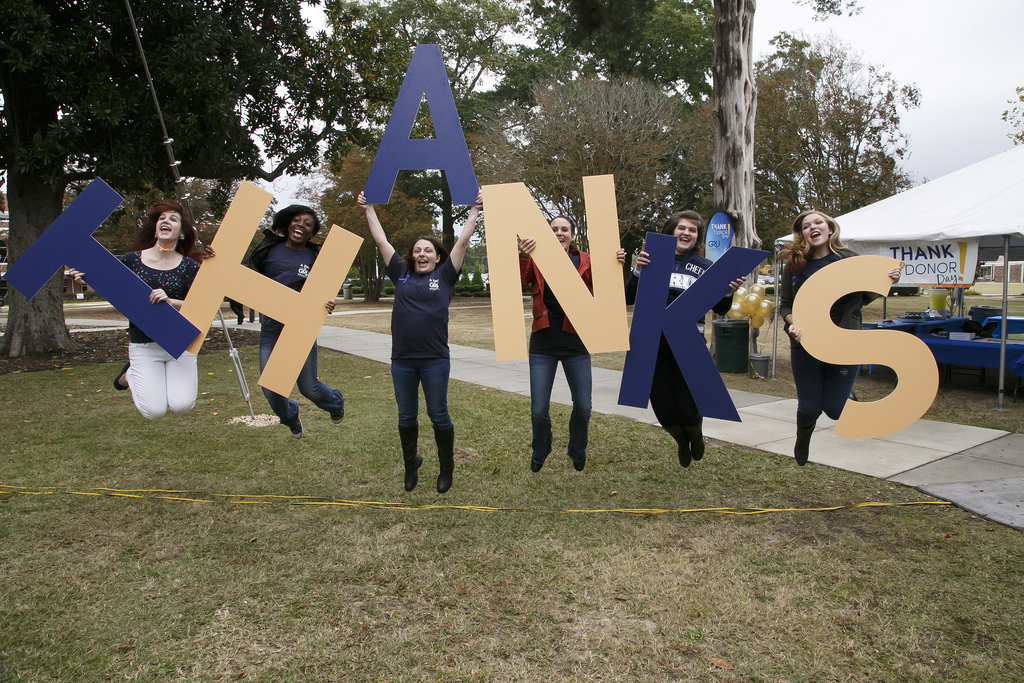 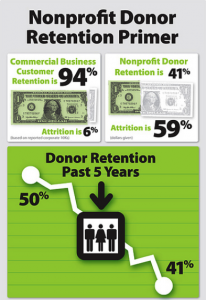 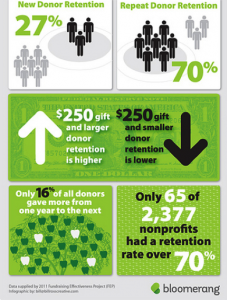 Several months ago Bloomerang published this graphic showing data from a study called the Fundraising Effectiveness Project. Much of the information on here is known to most of us – namely, that donor retention is pretty low. But there were two pieces of information that were particularly interesting to me:

The whole subject of donor retention boils down to one big point: the donor is not happy (for one reason or another), so she just goes away.
As Jeff and I have studied this subject we have concluded that there are two major reasons why donors go away. They are not thanked or appreciated properly and they don’t know their giving is making a difference. I am going to address the concept of “making a difference” in the next post in this series. Right now I want to drill down on thanking, especially as relates to major donors.
Our studies show that donors who are on a caseload and properly managed by a MGO retain as high as 85 to 93% even in organizations where the other donors are being retained between 40-60%. The key words here are “properly managed.” We have seen major donors on mismanaged caseloads where the retention is very low. So, just putting a major donor on a caseload does not assure their retention. I know this is obvious, but you would be amazed how many MGOs and major gift managers do not realize this.
One of the key ways to retain your major donor is to thank them quickly and promptly – regardless of what the receipting and thank-you system in your organization does. I say this because we have seen many situations where, if the MGO left the thanking up to the existing “system,” the donor would be seriously mistreated.
Take the case of the donor who gave an organization he loved $25,000 and was never thanked. The gift got banked but the paperwork and notices never made it out the door. It wasn’t until the donor ran into the CEO of the organization and asked him about it that the CEO embarrassingly discovered that his organization had seriously mismanaged this donor and his generous gift. It turns out that that $25,000 was not the only gift this donor gave. He gave the same amount to 8 different organizations – and only one of them thanked him. Guess who got the whole $200,000 the next year? The organization that thanked him.
Then there’s the $75,000 gift that went missing in another organization. I mean, the paperwork went missing, not the money. Isn’t it interesting that the money doesn’t go missing? This story has all the same elements of the previous story – same book, different chapter. We could tell you dozens of these stories. It is truly tragic.
The common thread running through each of these situations has two elements:

Finally, there are a number of good ways to thank donors – I list them here in no particular order of importance. And if you have some other ways, please send them to us so we can share them with our Passionate Giving community. Here are just a few, in addition to the standard thank you letter that goes along with a receipt:

Thanking donors is a big deal. Very big. And as a MGO you cannot afford to let this area slide. An un-thanked or poorly-thanked major donor is a donor that is walking toward the back door of your organization, getting ready to leave. Don’t let that happen.
Richard
Series details: