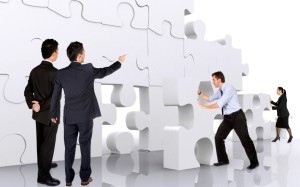 7 Keys to a Successful Major Gift Program – Key #1: Attributes of the Ideal Major Gift Organization
People often ask us what we think makes for a really good major gift program. Sometimes this question comes from frustration with how things are currently going. Often it’s about wanting to make their program better.
In the next seven posts, I’m going to write about the Seven Keys to a Successful Major Gift Program. These are seven indispensable categories of work that Jeff and I believe are a must in any major gift program. They’re the keys to be successful in raising significant dollars for program, retaining donors, and providing meaningful and fulfilling work for major gift officers.
I added “retaining donors” and “providing meaningful work for MGOs” to the list that I call the Major Gift Value Triad because all three of these things are important parts of having a successful major gift program:

So Key #1: Attributes of the Ideal Major Gift Organization starts with three critical elements. First, an ability to raise money (which is a by-product of a non-profit that is doing good work and a donating public who supports it). Second, a deeply held belief that donors are partners – rather than sources of cash – and a strong desire to nurture and retain them. And finally, a business environment and culture that honors its staff and provides them with meaningful and fulfilling work.
If you’re missing any of these three points, don’t read anymore. Just start working on getting the Major Gift Value Triad into your organization.
The next critical quality possessed by the ideal major gift organization is a clear understanding of the difference between direct marketing, public relations, events, and major gifts. (Tweet it!)
By “clear understanding,” I mean that the leaders of the organization have organized work in a manner that recognizes that major gifts is not direct marketing – although at times, it may use some DM strategies. Also it’s not public relations, although it will seek to preserve and promote the brand. And it’s not events, although at times it will use an event (sparingly, please) to relate to caseload donors.
Instead, major gifts is a one-to-one very personal strategy where the sole objective is to match a donor’s passions and interests to the needs of the organization.
There are so many non-profits that don’t have this right – major gifts reports to the manager of direct marketing. Or public relations, events, and major gifts are all lumped into one management structure. Or the events manager leads the major gift agenda. Crazy stuff like that! Crazy.
I don’t know why managers/leaders do this. All I can conclude is that it’s ignorance – ignorance about what a major gift program is and how it works. Or a bias towards some other marketing and communication program that keeps the major gift program “subordinate” to its agendas and objectives.
Whatever it is, it’s pure foolishness, and it’s a recipe for disaster and failure.
Major gifts should be an entity by itself, reporting directly to the Director/VP for Development – even if it’s a one-person department. It should not have PR, Events, or Volunteer Management – any of that stuff – mixed in. It should be solely dedicated to managing, nurturing, upgrading, and relating to major donors – period.
And who makes up the major gift team? Professionals who relate to individual major donors; others who relate to foundations; gifted team members who handle corporations and businesses, and; talent that handles other institutions like other non-profits, churches, synagogues, parishes, social service clubs, etc. All these “types” of major gift sources have one thing in common: they require a one-to-one, personal approach. That’s why I include them in the major gift “house.” Everything else belongs in another house – yes, a house on the same “development” street – but a different house.
Many times, when I present this concept to management and leadership, a great deal of angst, debate, and downright arguments ensue. It’s almost as if I’ve been promoting fundraising heresy, and I should be banned from the discipline. Only when I show how millions of dollars are lost each year and hundreds, sometimes thousands, of donors are going away each year can my voice be heard as one of reason and practicality.
Please listen to me, friend. This thing about donors is a sacred trust. It’s a mysterious and mystical thing. It’s something to be valued and treasured. Believe this, and then take steps to align your organization so it can properly and effectively house the ideal major gift program.
Richard
Read the whole series, 7 Keys to a Successful Major Gift Program:

Key #1: Attributes of the Ideal Major Gift Organization (This post)
Key #2: Make Sure You Have the Facts!
Key #3: Do You Have the Right Moves?
Key #4: Develop Offers that Donors Want
Key #5: Turn Planned Giving into Strategic Giving
Key #6: Treat Corporations and Foundations Just Like Individuals
Key #7: What You Get Done Matters!