Why We Can’t Think Big. 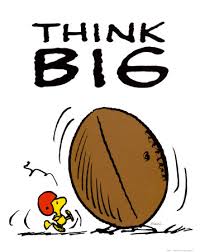 A few weeks ago I was in a meeting with a non-profit development team and their CEO.  The CEO came into the meeting, sat down, and with a big smile on her face, said, “Team, I want us to dream big.  I want to double the size of our organization in five years.  Before we leave this room, let’s figure out what it’s going to take to do it.”
My heart was pounding.  My eyes got wide, I looked over at Richard and I knew he was getting a rush.  I thought to myself, “Yes, this is awesome.  Now this is going to be fun!”
Then I noticed the faces of the development team.
Worry, anguish, skepticism…and fear.  All the good energy in the room vanished.
“What is going on?” I was thinking.  Later, during a break, Richard and I met in the hallway and had a chance to talk about what had just happened.  “I don’t get it, Richard. How could you not love your CEO having a big vision?”  I really began to get worked up.  To me, this was a gift the CEO was giving to the organization and no one seemed to want it.
Richard then said, “Jeff, you need to understand that these good people have been beaten down over the years.  This is a burden to them because management has been whacking away at them year after year.  All they’re thinking about is how much more work they are going to have to do.”
Then I got it.
And it made me think about why Big Vision is often disdained rather than embraced.

Gosh, this is a lot to overcome, isn’t it?  But, here’s the deal.  Without vision, without big ideas, we’ll never move forward.  I want to challenge you to let go of all the old baggage, step back from the day to day, and think big.  Create a new vision with your work.  Inspire others with your vision or get others inspired by the vision of leadership.
We need this more than ever in the non-profit sector.  You don’t have to color inside the lines everyday.  It’s okay to think big.  And, if for some reason it’s not, find a place where it is and where you can be lifted up for it.
Jeff